Robin considers himself a playful creator of moments and interactive experiences. The multi-layered works may be read as philosophical expressions, in which his intuitive visual language explores the human condition and the incommensurable being in uncertain conditions.

As artist and filmmaker he is fascinated by motions and moving images as his artistic works explore actual moments of change and their meaning to our lives. Time, space and change are the key ingredients of his works.

His artistic narrative is about creating site-specific hybrid installations that search for personal and collective experiences. Viewer engagement is often encouraged in his works by the use of elementary and playful interactions.

Subjects and objects, both material and immaterial, are revealing patterns and narratives in newly constructed works to raise questions about relationships and belief systems – of the artist and the spectators – by exploring (un)conscious stories in human lives, nature and technology.

His parallel and integral approach is about the making process as well as the aim towards fulfilling experiences for public and artist. These may take shape in exhibits, films, workshops, collaborations and presentations in both public and online spaces as well as art institutions.

With his practice-based research project Robin Weijers graduated as Master in Visual Arts in Fine Art Digital at Camberwell University of the Arts London (2019). He received a distinction as well as the Alumni Award for the excellence standard of work.

As interdisciplinary artist who has been practicing creatively throughout his career as cultural entrepreneur with a focus on ‘creating moments’, he exhibited his films and artworks in many venues in The Netherlands, Germany, Austria and United Kingdom.

He received a Master of Science in electrical engineering at the University of Technology in Delft, The Netherlands (1990). Then he became cultural entrepreneur and worked as creative director in the fields of media, film and the arts.

Born in Amsterdam (1964) he has his studio in the rural village of Kockengen, close in between Amsterdam and Utrecht. He supports ‘Platform BK‘, which is an important organisation concerning the representation of interests in the Dutch art field.

INSPIRATIONS through LIFE, NATURE, SCIENCE, TECHNOLOGY and THE ARTS

Robin is inspired by the states of life as well as the physical laws that govern life. By focusing on these human experiences he finds valuable drivers for his visual work.

His art practice is also inspired by questioning belief systems. Robin touched upon the art in science while studying Heisenberg’s uncertainty principle (¹) and the incompleteness theorems of Gödel (²) which enriched his being in his early years (³).

(¹) The uncertainty principle of Werner Heisenberg says it is impossible to determine accurately both the position and the direction and speed of a particle at the same instant.

(²) Kurt Gödel stated that: if the system is consistent, it cannot be complete. And: the consistency of the axioms cannot be proven within the system.

(³) In his early years Robin proposed to invent an electrical perpetuum mobile based on specific electric feedback-loops. As nature suggested other ‘laws’ during the attempts these became valuable learning curves for his art making as well. 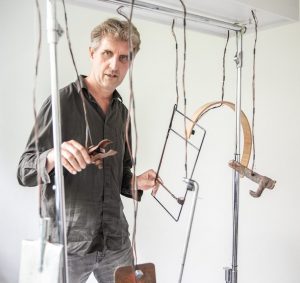